I’m still reeling and processing all the exciting events associated with WordCamp 2008 in San Francisco. Saturday was packed with so many of the best speakers – the best of the best in blogging, SEO, WordPress, PHP, Theme and Plugin development – it was blogging and WordPress overload.

Today’s conferences and events are true definitions of information overload and blogs and social media play important roles in the over-abundance of input. They are also part of the new online social networking surge, allowing attendees to share their experience of the event with the world through various media and social networks.

While attending the conference and afterward, there was so much information being shared on different services – it was difficult to keep up. Many were live blogging the WordCamp event on their blogs while others were using Twitter, Tumblr, and other microblog services to share the event. Many were also discussing the event on Twitter, Pounce, Plurk, and other social services.

It used to be that event coordinators would put most of their energies into the event specifics, corrdinating speakers, attendees, social functions, and logistics. Today’s events must also prepare and monitor the online world to help coordinate and track discussions, news, and feedback before, during, and after the event.

Here are some of the coverage from different services about WordCamp 2008 in San Francisco, a mere sampling of all the coverage. The speakers at WordCamp helped attendees and lurkers experience their WordCamp talks by sharing their notes, slides, and video of their programs.

You can find more slides at SlideShare, and videos should soon be on Viddler.

During Matt Mullenweg’s “State of the Word” presentation, I blogged it live on Twitter, which stirred up a lot of interest in the event from around the world. I wasn’t alone. Many had WordCamp discussions about the conference, about the speakers, and between themselves throughout the course of the day. Some even tweeted asking where I was in the room and asking questions, which meant my attention was constantly torn between the speakers, the attendees, my responsibilities at the event, and my computer’s announcements of Twitter activity all day long. Nathan Rice even uploaded a twitpic of me giving my presentation on Twitter. 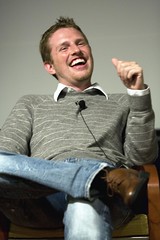 Flickr was working overtime for WordCamp 2008. Between Friday night’s pre-conference social events, the day long conference, and the WordPress Charity Scavenger Hunt, Flickr was on fire from WordPress Community uploads.

Here are some of the tags with images of WordCamp 2008 in San Francisco on Flickr that I found:

Here are some of the many WordPress fans with WordCamp 2008 photographs uploaded to Flickr:

While many aren’t using tags as often as was hoped, Technorati still found some WordCamp tags to index, including videos from YouTube tags.

Chuck Lewis, the SEO Rapper continues to get a lot of attention and he was the hit of WordCamp 2008. Many uploaded video of his SEO and WordPress raps to YouTube:

Some other speakers and activities at WordCamp 2008 were also uploaded to YouTube:

Finding WordCamp 2008 All Over the Web

WordCamp 2008 in San Francisco was everywhere around the web. I just couldn’t keep up. There were so many tags to track the event, though wordcampsf2008 and wordcamp2008 were the most popular.

Did you find some favorite social networks or services that helped you track what was going on with WordCamp?

Next time you plan your next event, or attend one, make sure you add all the various social networks and services by keyword and tag for your event to your feed reader so you can keep up with all the online discussions.