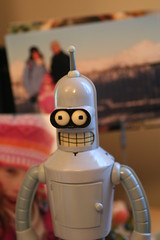 I was watching a tutorial video yesterday where the speaker said that “Blogging is a Technology that …”. Oh dear. If he thinks of blogging as a technology then he has missed the point.

Why is it that Pownce has better technology but Twitter has better conversations?

I am a member of both services. Twitter I visit, Pownce I just receive friend invitations. Most people I know say the same.

Of course there are quite a few people who love Pownce, but overall I would say Twitter is gaining more traction, and that is despite the service failure during Macworld (and others).

Yes there is a basic level of technology that has to be present, but to think about blogging as a technical rather than social endeavor not only misses the point but dooms your efforts to failure.

Focus on people. That is where the value is.