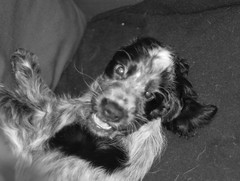 Just lately I have been a bit down on Facebook et al. While I am dismissive of certain social networking tools because of the time suckage, I wouldn’t want to imply that it is a complete waste of time trying them.

Human beings are like puppies. We learn through play. I think the less pressure we apply to ourselves sometimes the more we learn, so it is good to think of it as play, even if it is “corporate approved scheduled and structured play”.

That cute guy at the top of the article is our new puppy. When he is running around the garden barking at leaves and stalking footballs it looks like he is just being daft, and he might well be, but I like to think he is rehearsing vital doggy survival skills. Just because something is fun doesn’t mean you can’t learn from it! :)

I am finding Twitter a lot of fun. Initially I dismissed it. Luckily I came back and gave it another try after I discovered some interesting links and discussions going on. Now I love it. It’s fun and I learn some new stuff.

I believe that the nature of blogging *is* shifting, microtectonically, as people are exploring the use of new tools like Techmeme, Twitter, Seesmic, and so on. But it’s not laziness: it’s innovation and exploration.

Just because you hear bloggers like me talking about being productive and quitting Facebook, etc, doesn’t mean you should avoid anything that might not aid productivity. We need to learn, to experiment, to push boundaries, to try and fail, and yes, to play. All work and no play makes a blogger very dull :)