Last weekend at The Next Web Conference in Amsterdam I spoke with Anton Johansson and CEO Martin Källström from the new blog search engine Twingly. They present themselves as a new spam-free blog search engine with a strong focus on the conversational nature of the blogosphere. 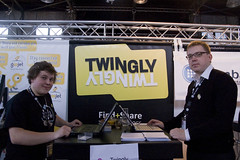 Lorelle VanFossen recently addressed the issue of spam in blog search engines and keeping their index spam free is one of the main objectives of Twingly. On top of that they focus on conversational search in the blogosphere by partnering with traditional media. They have closed several deals with major newspapers in Europe which provide links to the blogs that reference them. This is another step in showing the two-way links between blogs and online newspapers. Their main competitor in this area is of course Sphere but Twingly focuses on different markets. Read all about their ideas to start another blog search engine in the following interview and grab a special Blog Herald beta invite code while you can!

AH: What are your motivations to start another blog search engine and how do you compete with Google Blog Search and Technorati?

When Google launched a couple of years ago, the blog search engine they launched was really good. What happened though is that the major blog search engines such as Technorati started to move away from search into a more portal-like concept because of the influence of Google. Since then Google hasn’t enhanced its blog search in any way, at least not apparent from the outside.

We will move into conversational search and other kinds of media conversations too. That is the opportunity we saw two years ago when we started that. The future of media is conversation and there is a huge need to make these searchable as well.

AH: How does Twingly then relate to CoComment for example which focuses on that part of the blogosphere where all the conversation is happening?

We will also aggregate comments and we will work with CoComment to make it searchable. There is a need for companies and people to get the overview of the bloggers and the conversations to be able to find the quality content and that is something that is really hard to do today.

AH: Where CoComments is more of a centralizing system for your distributed contents you want to make it better searchable and more social?

AH: Right now you are focusing on the European market and signed a few deals with a major European newspapers, is Europe just the first step?

We just signed our first deal in South Africa and we believe their will be a major IT boom in Africa in a couple of years. It just started in Rwanda so that will be a very interesting market. Other than that, North America and Asia are continents we are looking at as well.

AH: Does this mean you are trying to tap into new markets?

Since we are just a very small startup with nine people we approach one market at the time and fortunately Internet penetration is social media uptake is very different in different parts of the world. We started out in Scandinavia and we are lucky to be there because the media are very progressive and now the same progress is being made in Europe. There is a lot going on in Asia and we want to be there as well.

AH: You made an amazing screensaver, a real-time visualization of the blogosphere, which currently only runs on Windows. Are you going to make it available for Mac users too?

Yes, it is definitely high on our wishlist. We are not porting the version ourselves but we are putting a lot of money of making it into a Mac version so it will be here. 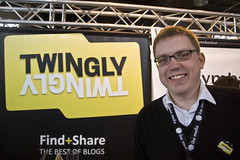 Are you interested in trying out Twingly and participating in the beta? The Twingly beta is currently limited to 2000 people but they reserved 30 beta invitations for Blog Herald readers! So go to Twingly and use the invitation code “blogherald”