It’s been a while since I last posted a Movable Type Monday (and during that time, I’ve been in three different countries!) and there’s been a lot of Movable Type activity! Most importantly, Movable Type 4.2 was released and introduced one of the largest licensing changes since the MT 3.0 debacle – the introduction of Movable Type Pro, what used to be two separate products (the professional pack and community solution) is now one, and is free for bloggers (which is another way of saying “unincorporated entities”).

Movable Type Pro lets you turn any site into a full social publishing platform, combining all of Movable Type’s abilities as a blogging and CMS with social networking features like profiles, ratings, user registration, forums, following, and more.

Another, less obvious, change was with the open source side – the name “Movable Type Open Source” seemed to generate a lot of confusion for new users and so, in an attempt to make things simpler, has been renamed to simply “Movable Type.”

Movable Type 4.2 was shortly followed by 4.21 after the community found and helped patch two important bugs that surfaced with 4.2. None-the-less, the response from the community has been overwhelmingly positive!

Aggregating Content Screencast: With the popularity of the Action Streams plugin, one frequent question is “How do I aggregate/collate action streams with entries from all my blogs?” Last week, Nick O’Neill published a screencast that gives us an answer to this question by using Mark Paschal’s new Order plugin

DevLounge Tutorials: Billy Mabray has been posting a number of Movable Type articles on The Blog Herald’s sister site, DevLounge: 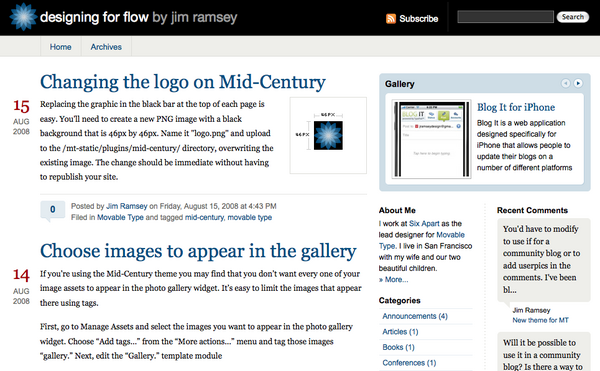 Mid Century Theme: Last week, Jim Ramsey released one of the most gorgeous themes (“template sets” in Movable Type language) I’ve ever seen, Mid Century. Not only does it look stunning but, as a template set, it is also heavy on features with ajax commenting, a jQuery gallery widget, and a refreshingly unique way of displaying (otherwise boring) archives. On his personal blog, Jim has also been posting code snippets that guide you through things like adding a top-nav, changing the logo and the gallery widget.

mixiComment: As Dave Recordon explains, mixi is Japan’s most popular social network and with the new mixiComment plugin, allows mixi users to sign in with their mixi account to comment on Movable Type blogs. This closely follows a similar announcements made last month to allow Facebook integration with Movable Type (a plugin I can’t wait for!).

Until now, installing and updating templates have been a bothersome task with a lot of cut-and-paste. But from now, Templets provides a “turn-key” solution to install any templates into your blogs.

Entry Image: A new plugin from Mike T gives you a way of associating an image asset with an entry. Mike also gives us a template tag recipe that illustrates how he uses it on his themes blog